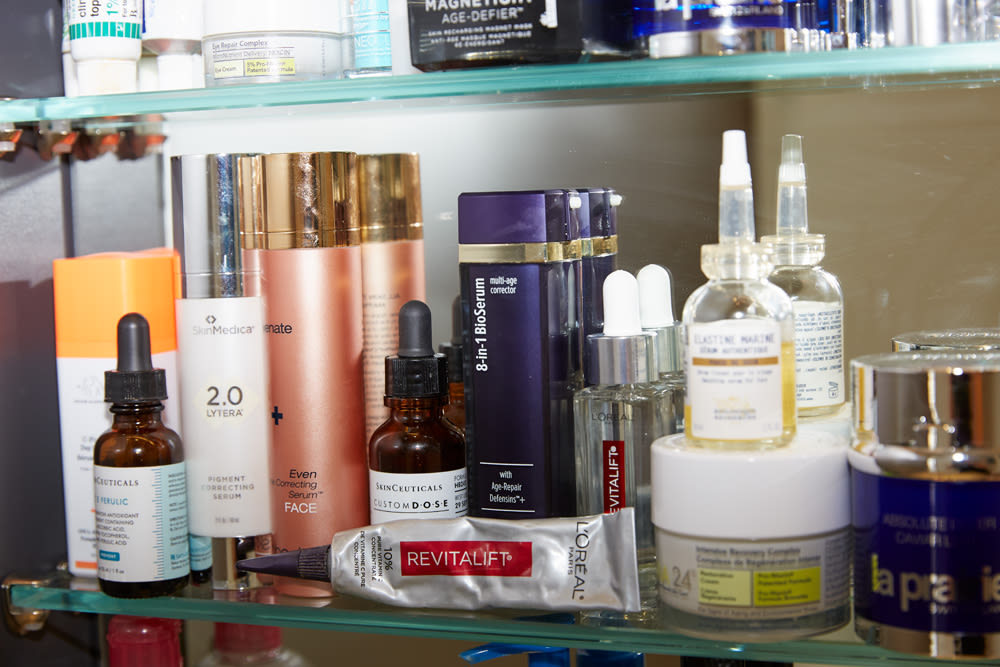 You probably know someone who it’s happened to. And it starts easily enough: they go online, looking to know how tall Sydney Sweeney is (5’4’’? taller?), and then click, click, boom, suddenly, they’re on a Reddit messageboard where homegrown “researchers” are swapping debunked retinoid myths. Read enough, and you might be scared into swearing off retinoids forever!

Even though retinoids have been used on skin since the ‘70s, there’s still a lot people get wrong about them. Take the myth about purging: while retinoids might bring clogs a-brewing deep in your pores to the surface faster, it’s a temporary issue that resolves within the first couple weeks of use. Most people don’t experience any purging at all. Another common confusion? That retinoids are only for teenage acne: they’re helpful for smoothing zits, but also plumping fine lines and evening discoloration. To set the record straight once and for all, ITG threw all the myths we could think of dermatologist Corey L. Hartman’s way. Find the facts to set any retinoid skeptic straight below.

The myth: Retinoids will give you sensitive skin.

Let’s start with an easy one. It comes from a kernel of truth: “When you first start a retinoid cream, there is some mild redness, scaling, dryness and irritation,” says Dr. Hartman. It’s not fun when your skin’s been as tough as teflon for most of your life and suddenly starts behaving like a pandemic toddler whose iPad just died. But while you might experience some increased sensitivity, retinoids don’t give you sensitive skin. Your skin would return to normal if you stopped use, and if you choose to push through, it will start acting natural again after a few months. Dr. Hartman recommends avoiding harsh soaps and strong active ingredients while skin is acclimating. Most importantly, he underscores, “the sensitivity is not permanent.”

The myth: Retinoids make you peel.

Like a snake? No. Maybe a retinol peel, like the Vi Peel, could do that. But you’d have to see a derm for one of those—at home retinoids only come at relatively low concentrations (like 40 times weaker than a Vi Peel, in some cases). And most are buffered with soothing oils to get ahead of the dryness issue anyway. It’s true that you might notice a little tightness, and maybe some flakiness, which Dr. Hartman calls “a temporary means to a fantastic end.” Retinoids speed up the rate at which new, fresh cells reach the surface of your skin, and like stepping onto a moving walkway at the airport, sometimes it takes a minute to find balance. If you’re worried about increased dryness, you can layer a rich cream or oil on top of your retinoid, and/or apply a second coat of lotion underneath.

The myth: You can’t use retinoids and go in the sun.

You should always wear sunscreen in the daytime, regardless of what’s in your routine. But Dr. Hartman says that the common practice of nighttime use actually has less to do with sun damage and more to do with shoddy early formulations. “Original retinols would be broken down when exposed to UV light from the sun,” he explains. If you put on one of these old timey retinols and went outside, your retinol cream would stop working. The newer generation of retinoids are a lot more stable, so it doesn’t matter if you apply them at night or in the morning. Studies have shown that while you might be a little more sensitive to sunburn when you first start on a retinoid regimen, skin should return to normal in a few months. Really serious photosensitivity was only observed in people taking isotretinoin pills, commonly known as Accutane.

The myth: If you use retinoids, you can’t get waxed.

OK, this one isn’t a myth guys. You really shouldn’t get waxed if you’re actively using a retinoid! “Retinoids weaken the bonds between skin cells, so they also make skin more vulnerable to shearing trauma like waxing.” If you have a wax appointment coming up, Dr. Hartman suggests stopping use of retinoids three to five days before. This is also a good general guideline to keep in your back pocket if you have a facial on the books: derms and aestheticians will avoid certain treatments (like lasers and peels) if there’s a potential for increased sensitivity.

The myth: Retinoids cause thinned skin and facial fat loss, and your skin will look saggier.

Imagine, if you will, a foamy pint of beer. As it sits on the bar, the foam layer thins—but the liquidy layer underneath isn’t affected. And when you take a sip, you’ll get a more robust gulp of actual beer if the bubbles have subsided. If you think of the layers of your skin like a cool, bubbly beverage, it’s a little easier to understand why this myth is so persistent. The foam is like the outermost layer of your skin, your stratum corneum. It’s made up of dead cells and when you exfoliate, removing some of those dead cells, it does thin out a little bit. But skin is so much more than just that top layer! “Retinoids stimulate collagen production,” says Dr. Hartman, and more collagen actually means thicker, stronger skin. While collagen and facial fat both contribute to the look of plump, youthful fullness, “topical retinoids don’t penetrate deeply enough to affect fat,” he adds. Fat is found underneath the skin, so… kind of like the coaster underneath your drink. It’s there for support, working just as hard as this metaphor.

The myth: Retinoids can give you depression.

“I can’t see how a topical could affect mood,” says Dr. Hartman. He explains that this myth probably came from confusing topical retinoids with isotretinoin, which has been associated with mood changes in some patients. “I’ve personally never had a patient report depression with isotretinoin, but it is one of the side effects that we monitor while on Accutane.” If you’re concerned about your mental health, you can keep using the cream—but maybe turn off Inside, and consider talking to someone who’s not your reflection in a screen.