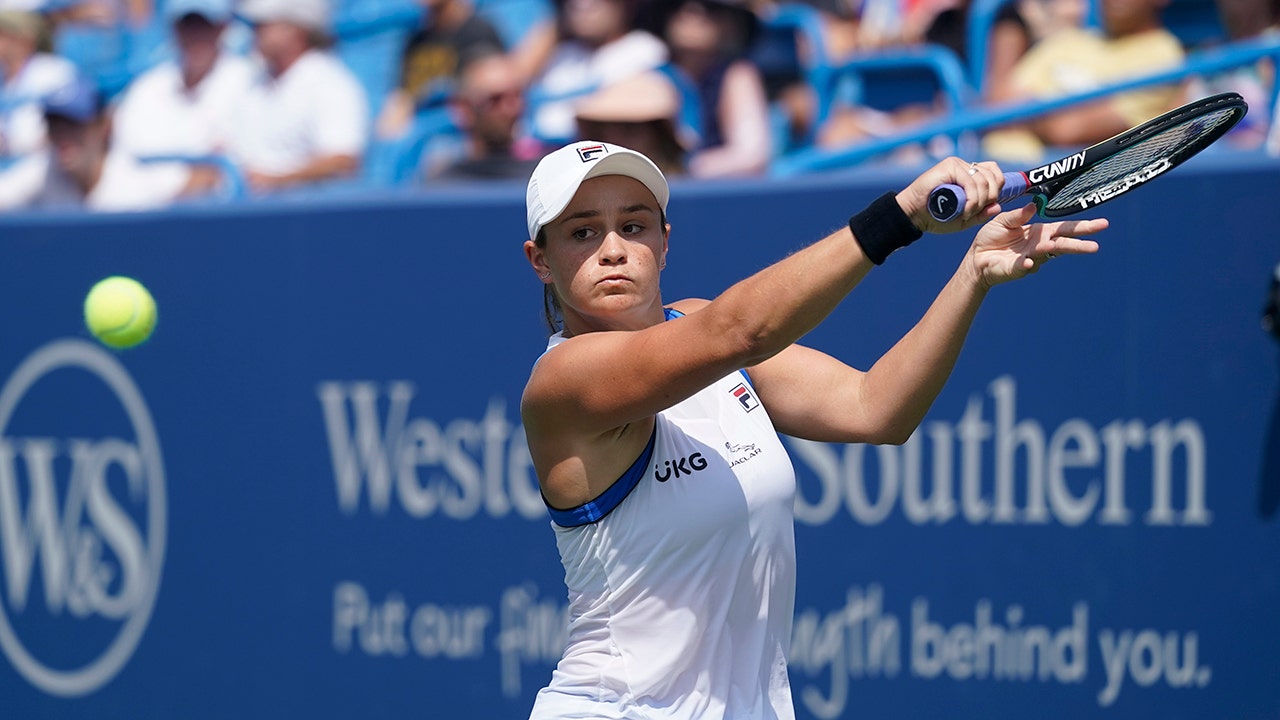 Barty will face two-time Cincinnati finalist Angelique Kerber, who won her quarterfinal when two-time Wimbledon champion Petra Kvitova retired during the second set because of a stomach problem. Kerber won the first set 6-4 and was tied 3-3 in the second.

Barty beat Kerber in the Wimbledon semifinals in July. They have split their six matches.

“She’s one the best competitors in the world,” Barty said. “Angie’s never far off her best. Even on days where she’s not playing her best tennis, she finds a way to stay in matches. When you play against Angie, you ride a fine line of not pressing too much, but also not being too defensive where she can move you around the court.”

Barty, ranked No. 1 for 87 weeks, hasn’t lost a set this week in Cincinnati, a tune-up event for the U.S. Open.

“This is actually why I’m here, to have a lot of good matches against the best players before going to the US Open,” Kerber said. “I’m excited to playing against Ash again.”

Barty’s biggest challenge so far this week came from Heather Watson in the second round. Barty has since dispatched of Victoria Azarenka and Krejcikova in straight sets.

The Australian was not deterred by the extreme heat and humidity in the morning’s first match at the Lindner Family Tennis Center.

“It was like a Brisbane summer day,” Barty said. “The heat’s certainly not a problem for me. It’s nice to play the first match. You know when your start time is, which is not very regular in the tennis world.”

Barty won 84% percent of first serves against Krejcikova and four of eight break points. She had only 15 unforced errors. Barty had seven aces Friday and has 15 in the tournament.

“I feel like I did a good job looking after my own serves,” she said. “I felt like a lot of the time I was in control of it. That just allowed me to be more free on Barbora’s service games. Overall, I was able to use my forehand and slice effectively.”

Barty won Wimbledon in July, but two weeks later was beaten in the first round of the Tokyo Olympics. She appears to have regained her stroke in Cincinnati.

“I feel like it’s nice to get a couple of matches now here in Cincy,” Barty said. “Each match you get to play in different conditions and you get more and more used to it. I’m just able to adjust and adapt and I look forward to my next one, no doubt.”

There was no celebration by Jil Teichmann when she dispatched of fellow Swiss and Tokyo gold medalist Belinda Bencic in straight sets, 6-3, 6-2. Teichmann ended her close friend’s nine-match win streak.

“Once we step on court it’s business, it’s just another player I have to deal with,” Teichmann said. “She had the same mindset.”

Teichmann, a wild card who shocked No. 2-ranked Naomi Osaka on Thursday night, continues her unexpected run against No. 5 seed Karolina Pliskova in Saturday’s semifinals.

When asked if she expected to be in this position, Teichmann said she’s not one to look ahead.

“No, I’m going match by match, because I know every match is a big challenge and I need to get the win to get the next chance,” she said.

Pliskova won when Paula Badosa retired in the second set due to injury.

Five of the top eight men’s seeds reached the quarterfinals for the 11th time in tournament history.

Top-seed and No. 2-ranked Daniil Medvedev reached his third consecutive quarterfinal in Cincinnati and rolled to a 6-1, 6-1 victory over No. 7 seed Pablo Carreno Busta.

Medvedev who has yet to lose more than three games in a match this week, will face fellow Russian Andrey Rublev in Saturday’s semifinals. He has never lost to Rublev in four meetings.

“It’s always a new match,” Medvedev said. “He plays with a lot of intensity. Serves well. Always a difficult match. Right now, my level of confidence is very high.”

The other men’s semifinal on Saturday will pit No. 2 seed Stefanos Tsitsipas against No. 3 seed Alexander Zverev.