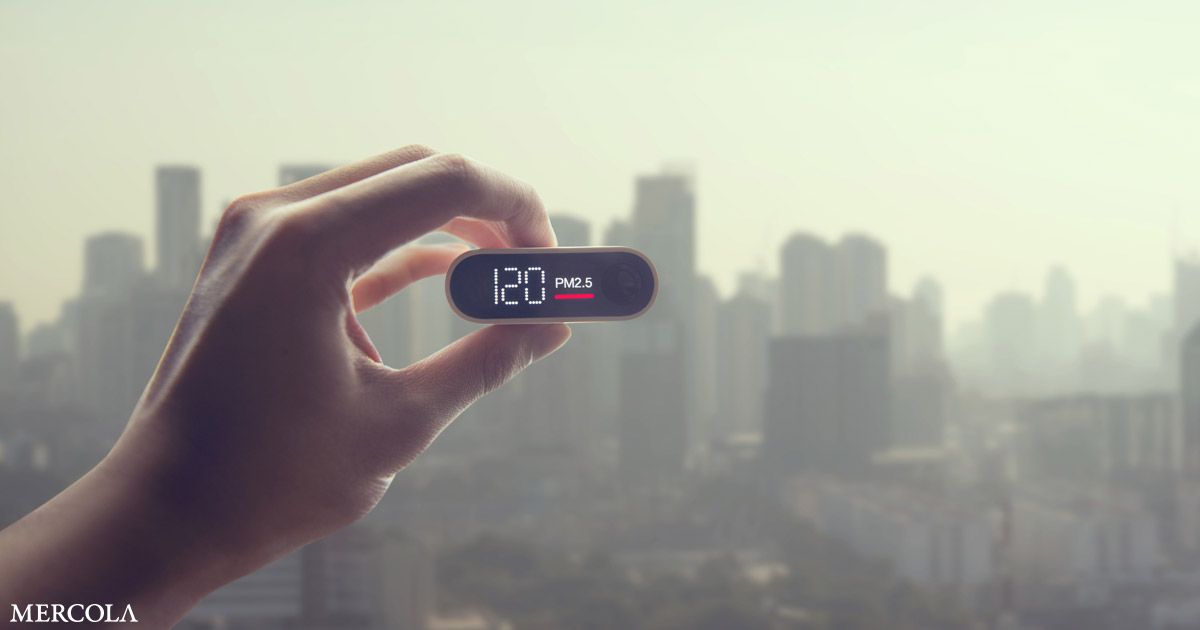 Alzheimer’s disease is a form of dementia that is characterized by an accumulation of beta-amyloid plaques and neurofibrillary tangles in the brain. New research1 presented at the Alzheimer’s Association International Conference 2021 has found an association between improving air quality and reducing the risk of dementia.

Alzheimer’s disease affects an estimated 5 million Americans, a number that is expected to reach 14 million by 2060.2 It continues to be a leading cause of death, with 1 in 3 seniors dying with a form of dementia — more than the number killed by breast and prostate cancers combined.3

With no known cure, researchers have been scrambling to find treatments, often with a misguided focus on the symptoms of the disease — excess beta-amyloid plaques in the brain. Over 300 drug trials have failed4 thus far leading one researcher to comment, “Numerically, you have to say they [the odds] are not good.”

Past studies have found links between air pollution and the development and accumulation of beta-amyloid plaques, but this research team believes this is the first accumulated evidence to show that by reducing air pollution, society can lower the risk of Alzheimer’s and all-cause dementia.5

The researchers followed two groups of adults in Europe and the U.S. who were at-risk of dementia.6 The 10-year study was recently presented at the Alzheimer’s Association International Conference 2021.7

Researchers undertook the study following past data that linked air quality and cognitive impairment. With rising levels of air pollution and increasing cases of dementia they sought to explore how air pollutants may affect the development of dementia. More importantly, they hoped to identify what a reduction in air pollution may mean for brain health.

Claire Sexton, Alzheimer’s Association director of scientific programs and outreach, was excited by the results of the study, commenting in a press release:8

“We’ve known for some time that air pollution is bad for our brains and overall health, including a connection to amyloid buildup in the brain. But what’s exciting is we’re now seeing data showing that improving air quality may actually reduce the risk of dementia. These data demonstrate the importance of policies and action by federal and local governments, and businesses, that address reducing air pollutants.”

The researchers engaged a group of older women in the NIH-funded Women’s Health Initiative Memory Study Epidemiology of Cognitive Health Outcomes cohort.9 The women did not have dementia at the start of the study and were followed from 2008 to 2018.

Each year the researchers performed a detailed cognitive function test on the individuals and mathematical models were used to estimate air pollution at the homes. The women who lived in areas where the air pollution improved at greater than 10% of the EPA’s standard experienced benefits that were similar to the lower risk level associated with women who were two to three years younger.

The evidence from France showed reducing PM2.5 over 10 years reduced the risk of all-cause dementia by 15% and Alzheimer’s Disease by 17%. Additionally, the study data demonstrated that long-term exposure increased the risk of beta-amyloid levels in the blood, which pointed to a possible biological connection between the physical changes that define Alzheimer’s disease and air quality.

The benefits to the women in Europe and the U.S. appeared to be global without regard to confounding factors such as their level of education, geographic region, history of cardiovascular disease or age. The lead author, Xinhui Wang, Ph.D., commented in the press release:10

“Our findings are important because they strengthen the evidence that high levels of outdoor air pollution in later life harm our brains, and also provide new evidence that by improving air quality we may be able to significantly reduce risk of cognitive decline and dementia. The possible benefits found in our studies extended across a variety of cognitive abilities, suggesting a positive impact on multiple underlying brain regions.”

Air pollution is an insidious problem that does not recognize borders and travels thousands of miles. A collaboration of more than 40 researchers analyzing data from 130 countries called air pollution the “largest environmental cause of disease and premature death in the world today.”11

Fine particulate matter measures 2.5 microns or less in width. For comparison, there are 25,000 microns in 1 inch and PM2.5 particles are about 30 times smaller than a human hair.12 Fine particulate matter is emitted from the exhaust of gasoline-powered engines and other operations that burn wood, oil or coal for fuel.

Fine particulates can also form in the atmosphere from pollution emitted from power plants as it reacts with gases and droplets. Because of the nature of air pollution, these chemical reactions can happen miles from the origin of the pollution. Within the U.K., the greatest emissions as reported by the Department for Environment Food and Rural Affairs13 are from road vehicles and industrial emissions.

Particles of this size are small enough to pass through lung tissue and enter your bloodstream, which can trigger chronic inflammation and chronic disease. Although California has one of the strictest car emission standards in the U.S., the state continues to be plagued by nitrogen oxides pollution. Researchers have found nitrogen oxides are released into the atmosphere from synthetic nitrogen-based fertilizers.14

The vast agricultural lands in California may be responsible for as much as 51% of nitrogen oxides off-gassed across the state.15 “Nitrogen oxides” is a catch-all term used to designate nitrogen nitric oxide and nitrogen dioxide, both of which react with oxygen and sunlight to produce ozone in lower atmospheric levels.

As I discuss in “Surprising Sources of Air Pollution,” nitrogen-based fertilizers also damage the soil below the surface by affecting the soil microbiome, which plays a significant role in nutrient uptake and signals plant development.17

Nearly 95% of the world live in areas where the pollution is higher than what the World Health Organization deems safe.18 Once PM2.5 is in the body, it can deposit in any of the organ systems. It also has been linked to inflammation that leads to chronic diseases such as cardiovascular disease,19 obesity,20 chronic obstructive pulmonary disease21 and cancer.22

One study that evaluated the ambient air pollution in Europe discovered the problem was far worse than previously measured.23 One 2015 study24 discovered a link between black carbon, which is a marker of traffic-related air pollution, and sleep in participants of the Boston area Community Health survey.

Long-term exposure may be associated with shorter sleep duration. In children, PM10 was associated with sleep disturbances,25 as was secondhand smoke. Children with asthma who were regularly exposed to tobacco smoke at home were more likely to suffer from sleep problems,26 including longer delays and falling asleep, daytime sleepiness, sleep-disordered breathing and overall sleep disturbance.

Sleep disturbances are a well-known trigger for obesity27 and may contribute to diabetes.28 Additionally, sleep deprivation also has been linked to an increased risk of Alzheimer’s disease. One study29 found a higher risk of dementia was associated with sleep duration of six hours or less in individuals who are 50 and 60 years old.

One small study30 published by the NIH found that losing just one night of sleep increased the amount of beta-amyloid production. Conversely, studies31 have also suggested that getting enough deep sleep will help protect against the risk of Alzheimer’s disease.

Researchers collected data32 from 20,000 people living in China and believe the findings are relevant to the entire world. They found language and math skills were affected when individuals were exposed to toxic air pollution. The average impact on those tested was equivalent to losing one year of education.

In this study, the longer people were exposed, the greater the damage they experienced. One of the major components to air pollution is carbon dioxide. According to the Center for Climate and Energy Solutions,33 carbon dioxide makes up 76% of all greenhouse gas emissions.

Plants and trees use this for photosynthesis, which you may think may be good for plant life. But like most things, plants need a balance. As the level of CO2 rises, plants produce more pollen,34 which in turn raises your exposure and produces more severe seasonal allergies. However, the pollen has a lower protein level, which does not offer long-term nutrition for honeybees.35

In addition to the raised risk for Alzheimer’s disease when you’re exposed to air pollution or a lack of sleep, there are other lifestyle factors that have been linked to the development of the disease.

In an interview with me that you can watch at “Lifestyle Factors Linked to Alzheimer’s,” Dr. Dale Bredesen, director of neurodegenerative disease research at the University of California, Los Angeles School of Medicine, proposes there is a genetic code that predisposes a person for Alzheimer’s disease.

He notes there an estimated 75 million Americans have the single allele for the ApoE4 gene, which increases the risk of developing the disease by 30% over their lifetime. The predisposition does not guarantee the disease will develop but, rather, that environmental stressors may have a greater impact on an individual.

One of those environmental stressors is insulin resistance and diabetes. Overindulgence in grains and sugar can overwhelm the brain with consistently high levels of insulin. Eventually insulin and leptin signaling become profoundly disrupted, which leads to impairments in cognitive abilities and memory.

One study36 published in Diabetes Care found Type 2 diabetes is associated with a 60% increased risk of dementia. Another study37 featured in The New England Journal of Medicine noted even a mild elevation of blood sugar, such as 105 or 110, is associated with an elevated risk for dementia.

A third study38 revealed a high-carbohydrate diet increases your risk of Alzheimer’s, whereas eating a high-fat diet lowers it. A study published in 201839 also linked too much sitting with memory problems in middle age and older adults. Magnetic resonance imaging demonstrated brain thinning in the medial temporal lobe in participants who sat for extended periods of time.

I don’t believe that a failing memory and eventual dementia are par for the course for aging. Nor do I believe that Alzheimer’s is inevitable. There are many contributing factors, but there are also preventive strategies that can be used that reduce your overall risk and prevent cognitive impairment. You’ll find many suggestions in “Research Highlights Importance of Good Sleep For Prevention of Alzheimer’s.”