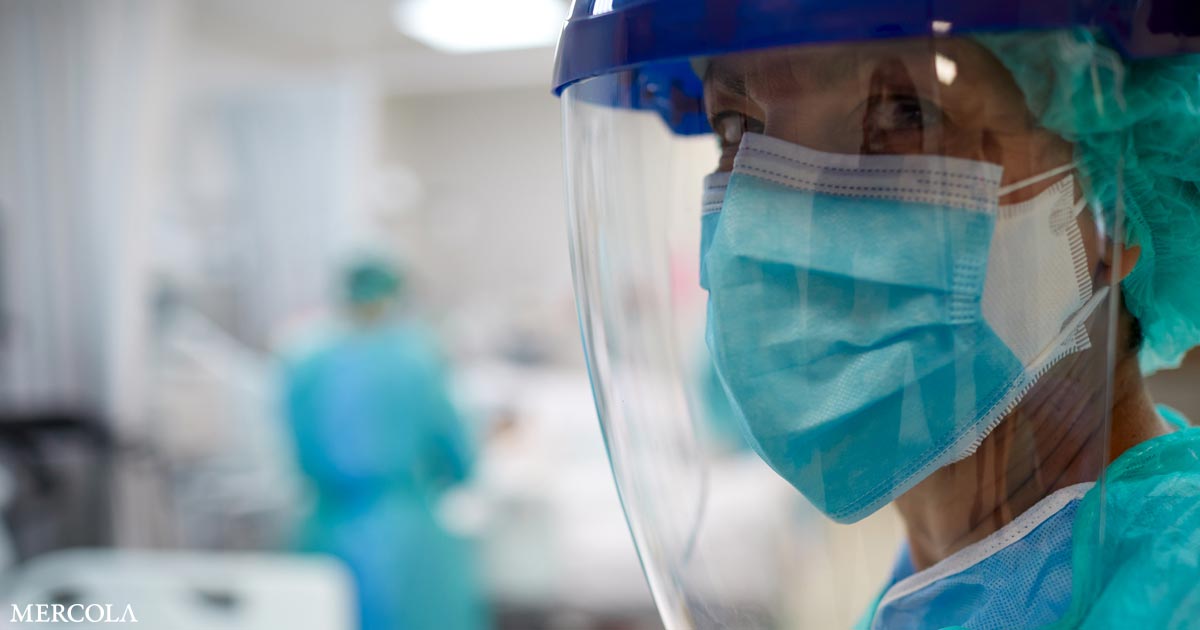 The Telegraph1 disclosed that leaked data from the U.K. showed 56% of the patients admitted to the hospital with COVID-19 were not admitted because of COVID-19 but, rather, only tested positive after admission during routine testing done on all patients.

The tests identified individuals who may have had a false positive PCR or had symptoms so minor they were not recognized. This is a far cry from the “remorseless logic of exponential growth” in the number of COVID-19 patients predicted by U.K. prime minister Boris Johnson in June 2021, when Johnson warned the country that hospital admissions were rising by 50% each week.2

More than a month later, hospitals were reporting the number of infections is manageable, and the numbers have not come close to those recorded during a peak in January 2021. Additionally, the data show that patients have shorter stays than during the January peak, which The Telegraph article attributes to England’s COVID-19 injection program.3

The justification for the COVID-19 injections has been to reduce the number of individuals who become infected. However, as data collection has demonstrated, experts are not making it easy to evaluate raw numbers of real data.

The Telegraph4 had access to leaked data from the NHS, which showed only 44% of patients classified as COVID-19 patients had a positive test at admission. The remaining 56% did not test positive until they underwent a standard test during hospitalization.

The pattern in the leaked data analyzed by The Telegraph showed the majority of patients were likely treated for other conditions and some were not tested for COVID-19 until weeks after hospitalization. Dr. Carl Heneghan, director of the center for evidence-based medicine at Oxford University, was appalled by this revelation and is quoted in The Telegraph saying:5

“This data is incredibly important, and should be published on an ongoing basis. When people hear about hospitalisations with Covid, they will assume that Covid is the likely cause, but this data shows something quite different — this is about Covid being detected after tests were looking for it.”

Heneghan urged government officials to make clear data available, adding that what is currently published could lead people “towards false conclusions.” Several other health experts in the U.K. were equally as disturbed the government had been hiding data. Sir Graham Brady, British politician and member of Parliament, told a reporter from The Telegraph:6

“Nearly 18 months into the Covid crisis, it is absurd that data breaking down hospital admissions still isn’t publicly available on a regular basis. Counting all patients who test positive as Covid hospitalisations is inevitably misleading and gives a false picture of the continuing health impact of the virus.”

Greg Clark, chairman of Commons science and technology select committee, said he would be asking for a breakdown of hospitalizations on a regular basis after The Telegraph published the leaked data. He told a reporter from The Telegraph:7

“If hospitalisations from Covid are a key determinant of how concerned we should be, and how quickly restrictions should be lifted, it’s important that the data is not presented in a way that could lead to the wrong conclusions being drawn.

While some of these people may be being admitted due to Covid, we currently do not know how many. And for those who are not, there is a big distinction between people who are admitted because of Covid and those are in for something else but have Covid in such a mild form that it was not the cause of their hospitalisation.”

Clear Data Can Be Difficult to Find

The data were leaked from an NHS daily situation report that is collected from all the hospital trusts in England. One NHS data expert suggested that the data distort the true picture, saying:8

“It creates an impression that all these people are going into hospital with Covid, and that simply is not the case. People are worried and scared and not really understanding the true picture — that is what I find despicable.”

Interestingly, in June 2021, the NHS trusts were also asked to analyze their data and determine how many patients were admitted for treatment of COVID-19 and how many were in the hospital for other reasons, and yet were still classified as COVID-19 patients. As of July 26, 2021, this data had not been released.9

On the flip side, there is mounting evidence that COVID-19 injections can have tragic results, as demonstrated by the ever-increasing death toll attributed to the shot. The vaccine adverse event reporting system (VAERS)10 tracks deaths, hospitalizations, urgent care visits, specific health conditions and symptoms in a searchable database.

However, since data from an investigation by the U.S. Department of Health and Human Services found the VAERS catches a mere 1% of vaccine injuries,11,12 these numbers are not close to the full story. This is likely because the system is primarily because a passive process and reports are filed voluntarily.

Cases and Actual Infection Are Not the Same

Many of the reported COVID hospitalizations were likely reported “cases” and not actual infections as Heneghan, Brady and Clark were quoted above. In early 2021, hospitalization rates13 with COVID-19 dropped from 132,474 Americans on January 6, 2021, to 71,497 on February 12, 2021.

This drop was predicted since the recommended cycle threshold on the PCR tests was lowered in January 2021. The PCR swab collects RNA that is then reverse transcribed into DNA. Because of the tiny size, it must be amplified to become discernible.

Every round of amplification is called a cycle, and the number of amplification cycles used is called the cycle threshold. The higher the cycle threshold, the greater the risk that insignificant sequences of viral DNA are magnified to the point that the test reads positive even when the viral load is extremely low, or the virus is inactive and poses no threat to you or anyone else.

Many doctors and scientists, including Dr. Anthony Fauci,14 director of the U.S. National Institute of Allergy and Infectious Diseases, have noted any cycle threshold over 35 cycles is scientifically indefensible.15,16 One study published in Clinical Infectious Diseases17 in September 2020 revealed that a PCR test at a cycle threshold of 35 or higher dropped the accuracy to 3%.

Since the consensus is that cycle thresholds over 35 render the test useless, it begs the question why health agencies would continue to recommend testing that was almost guaranteed to render a false positive. Indeed, it seems clear at this time that we are not dealing with a lethal pandemic in any real sense.

Mortality statistics further prove this is the case since these statistics have remained stable in 2020 and in line with previous years.22,23,24 In other words, people are dying from COVID-19, but the illness is not killing an excess number of people. Data released by the CDC August 26, 2020,25 showed only 6% of so-called COVID-19 deaths had COVID-19 as the sole cause on the death certificate.

In recent weeks, the data has also demonstrated that the COVID-19 injections will not put an end to the infection even if 100% of the population was vaccinated. For example, 100 fully vaccinated crew members on the warship HMS Queen Elizabeth tested positive for COVID-19 while they were out to sea.26

This demonstrates that the vaccine-induced herd immunity narrative is not possible. In a video report,27 Dr. John Campbell reviewed the data from the U.K. I don’t agree with everything Campbell says, such as promoting mask-wearing. However, the data review is of interest.

As of July 29, 2021, nearly 90% of the adult population in the U.K. had received one dose of COVID-19 injection28 and 70% had received two. Yet symptomatic cases among partially and fully “vaccinated” are now suddenly on the rise, with an average of 15,537 new infections a day29 being detected in this group, a 40% increase from early July.

Meanwhile, the daily average of new symptomatic cases among unvaccinated is 17,581, down 22% from the week before. This suggests the wave among unvaccinated has peaked and that natural herd immunity has set in, while “vaccinated” individuals are becoming more prone to infection.

In a recent CNBC news report, they revealed the CDC has stated COVID injection breakthrough infections are more severe in people who are elderly or who have serious medical conditions.30 In other words, the very people the injection is supposed to protect are the ones who are getting the sickest.

The week before, there were 4,450 cases and 79 deaths in fully vaccinated individuals. This represents a jump of 716 fully vaccinated people who had a breakthrough COVID infection in just one week.

Counties in the US Find Inflated Reporting of COVID Deaths

Discrepancies in reporting data have been found in the U.S. as well. In the early months of 2020, many in the mainstream news media laughingly called concerns that there were more deaths reported from COVID-19 than could be attributed to the disease, a “death toll conspiracy.”34 Yet, less than one year later that is exactly what county officials in California have discovered.35

In other words, the number of people who died “from” COVID-19 was far lower than those who died “with” COVID-19. As I’ve written, the high reported rate of individuals with the disease was in considerable part due to the high cycle threshold in PCR testing. In reality, the PCR test is not a diagnostic tool.

After analyzing data, Santa Clara and Alameda counties in California discovered they had a significant discrepancy in the number of people who actually died FROM COVID-19.36 The data did not change. The number of actual deaths did not change. But authorities found that 22% of the deaths recorded from COVID could not be attributed to the virus.

Santa Clara County reported the new numbers were generated by counting only those whose cause of death was from the virus and not counting people who tested positive at the time of death. The month before, in June 2021, Alameda County also recounted deaths attributed to COVID-19 and registered a death toll drop of about 25%.

University of California San Francisco professor of medicine and infectious disease expert Dr. Monica Gandhi believes the CDC may soon ask all counties to recount their deaths from COVID-19 and the entire nation could see a drop in the death toll.

Yet, as I have reported, financial incentives offered to hospitals to alter the death certificates as well as PCR testing that inaccurately labeled people as infected with a virus, might be two significant contributing factors that continue to alter an accurate representation of the number of people who died from the virus.

In my most recent interview with Dr. Vladimir Zelenko, we discussed some of the acute, subacute and long-term risks for those who have accepted the COVID injection. Additionally, he outlines the strategic plan to help protect your health if you or someone you know got the shot and now has serious regrets. You can see the interview and the strategies in “Might Covid Injections Reduce Lifespan?“

For those who are still deciding, it’s important to do your own risk benefit analysis based on your individual situation before making up your mind. If you’re under the age of 40, your risk of dying is 0.01%.37 This means you have a 99.99% chance of surviving the infection. Since the mRNA shots are not designed to prevent infection, but only to reduce the severity of symptoms, it begs the question — what is being protected?

I won’t tell anyone what to do, but I do urge you to take the time to review the science and weigh the potential risks and benefits before making a decision that may have permanent repercussions for the rest of your life.