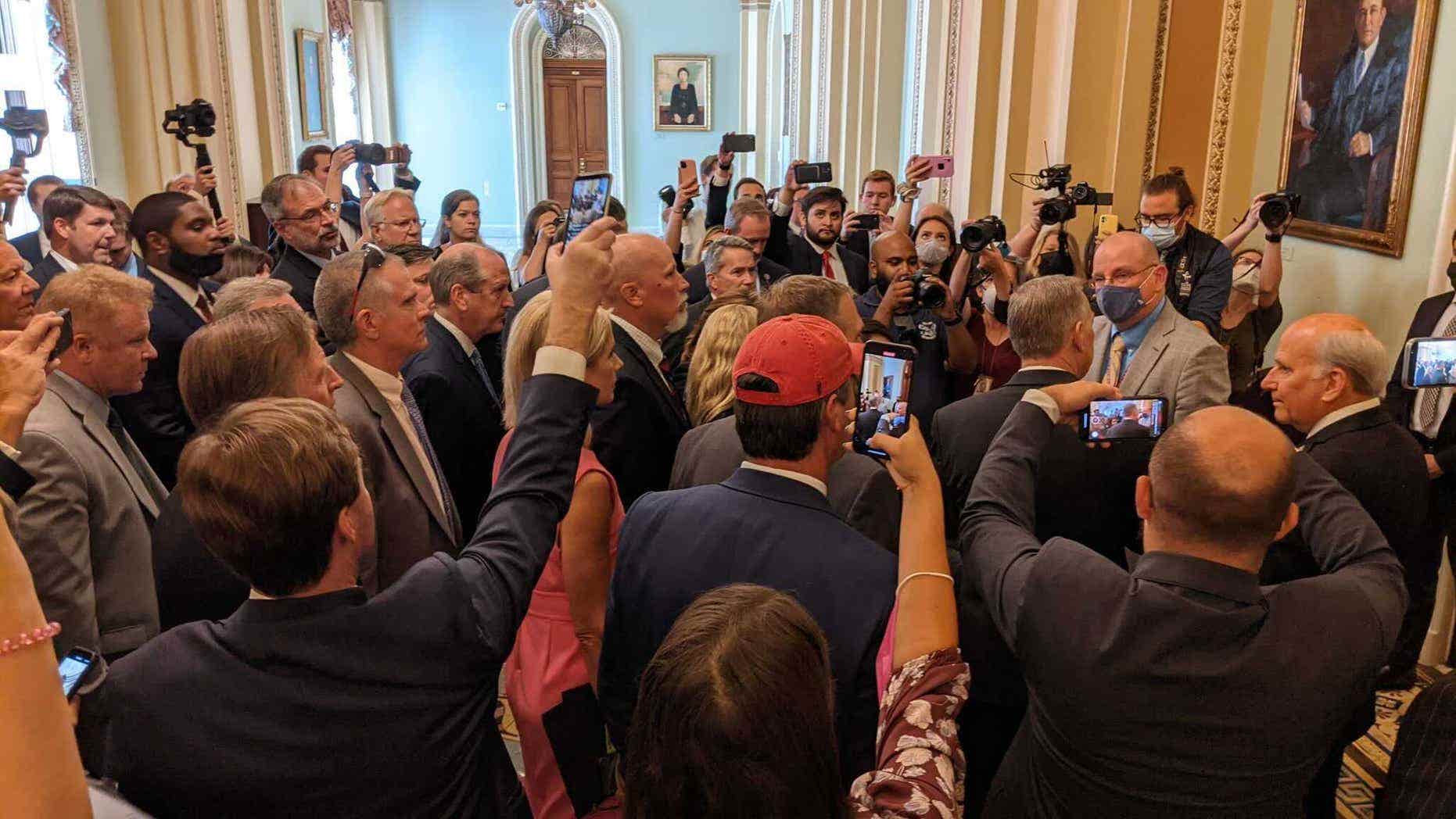 Good morning and welcome to Fox News First. Here’s what you need to know as you start your day …

Rep. Lauren Boebert, R-Colo., argued that the government has no authority over such edicts.

“If we cave on our freedoms in the halls of Congress, what hope do the people have across America?” she told Fox News on Thursday night.

Boebert was part of a large group of GOP lawmakers who protested Pelosi’s reinstated mask mandate this week by walking over to the Senate side of the Capitol, where there is no renewed requirement.

“I will not comply with Pelosi’s anti-science mask mandates,” she said. “She can kiss my mask.”

“The Democrats are back at it again – whatever it takes to put you back into lockdown,” she said in a video shared to Twitter. “Now we hear that Speaker Pelosi is going to have people arrested if they do not wear a mask. I don’t know about you, I’ve not heard one valid reason that a person who has been vaccinated should be forced to wear a mask.”

Rep. Thomas Massie, R-Ky., is suing Pelosi over the mandate, raising constitutional challenges to her authority, he told Fox News’ Bill Hemmer on Thursday. CLICK HERE FOR MORE ON OUR TOP STORY.

In other developments:
– Dozens of House Republicans, staffers march maskless to Senate floor to protest mask mandate
– Republicans push back against Nancy Pelosi’s mask-wearing orders: ‘She has gone totally nuts’
– TUCKER CARLSON: COVID has been good to Democrats, it got them to the White House
– Ingraham: Biden seeks ‘masks and mandates forever,’ as WH poised to guide ‘the science’ wherever they need
– Pentagon calls COVID-19 a threat to national security, weighs making vaccinations a requirement

Cuomo had invited California restaurant owner Tony Roman to speak about his new policy for customers to show “proof of being un-vaccinated” to eat at his restaurant.

The liberal CNN host objected to Roman’s policies and immediately attacked his logic, only for Roman to call out Cuomo’s own hypocrisy when it comes to following COVID-19 restrictions.

“The whole reason this is happening is because people won’t protect themselves. I mean, what are you thinking?” Cuomo asked.

“Then why did you leave your house when you had COVID? I mean, you had it, and you left your house. It’s been documented,” Roman replied. CLICK HERE FOR MORE.

In other developments:
– California restaurant says it will serve only unvaccinated customers
– CNN’s Jake Tapper insists he’s ‘not a liberal Democrat’ nor ‘advocating that Joe Biden be reelected’
– Dave Rubin fires back at Twitter for locking account on ‘harmful’ COVID tweet: ‘They’re coming for everybody’
– Tampa Bay Times runs ‘hit piece’ on DeSantis press secretary on how she landed job, gets panned by critics
– Media ‘turning out the lights’ on Facebook’s infringement of free speech: Sen. Ted Cruz

The unidentified sailor was a member of the ship’s crew and is accused of starting the July 12, 2020 blaze, the Navy said. The charges are based on evidence collected during an investigation, Navy spokesman Cmdr. Sean Robertson said in a statement.

“Evidence collected during the investigation is sufficient to direct a preliminary hearing in accordance with due process under the military justice system,” Robertson said.

Arson was suspected of causing the fire and a sailor was questioned, a senior defense official said weeks after the blaze.

The fire caused billions of dollars in damage on the amphibious assault ship, which raged over four days and was the Navy’s worst U.S. warship fire outside of combat in recent memory. CLICK HERE FOR MORE.

THE LATEST FROM FOX BUSINESS:
– Facebook whistleblower turned down $64G severance package that would have bought her silence: report
– Kudlow: We are not going to tax our way into prosperity
– Social Security Administration backlog has delayed eligibility and card processing, study shows
– China’s Didi denies report of plan to buy back shares
– Cargo ship ordered to leave US waters after tree-destroying Asian beetles found

Seattle-area radio host Jason Rantz spoke about rising crime and the effects of the “Defund the police” movement during an appearance on “Fox News Primetime” on Thursday night.

“When they decided to lean into the defunding of police, we [in Seattle] saw a huge rise in crime,” Rantz said. “Last year was a 26-year homicide rate record that we hit and this year we are almost certainly going to exceed that.

“When you cut the police forces, people die and people have to understand that that’s the reality — and that the mayor suddenly is coming out and talking about it. I hope people realize that is telling you how dire the situation is in Seattle. You had within just a 24-hour period, over the weekend, four people get shot to death in just a couple of neighborhoods.”

Not signed up yet for Fox News First? Click here to find out what you’re missing.

Fox News First was compiled by Fox News’ Jack Durschlag. Thank you for making us your first choice in the morning! Enjoy your weekend and we’ll see you in your inbox first thing Monday.