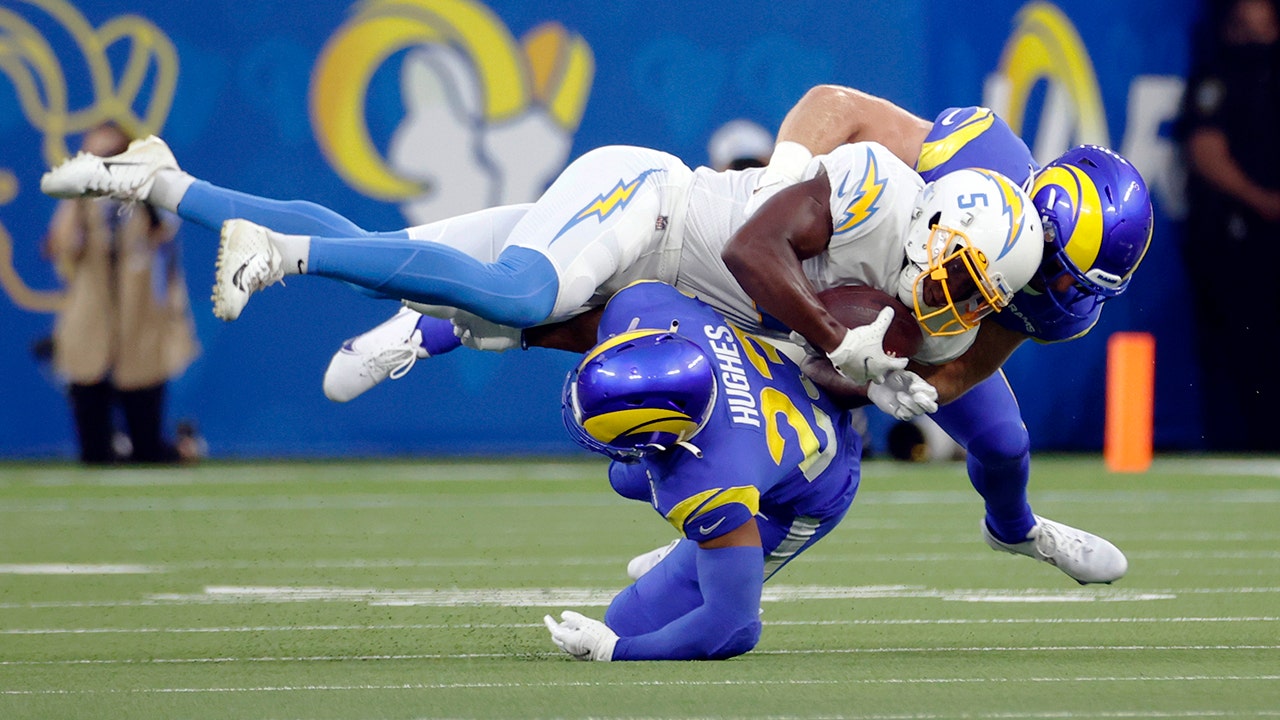 Nearly 70,000 football fans filled up the terraces, concourses and party areas for the first time at SoFi Stadium, reveling in the opportunity to see Los Angeles’ two hometown teams in person at their new address.

The Los Angeles Rams and the Los Angeles Chargers both intend to put on much better shows — with several better players — for those fans next month when they get to the games that count.

Darius Bradwell rushed for a touchdown in the third quarter and the Chargers beat the Rams 13-6 Saturday night in the first NFL game with fans at SoFi.

Rams owner Stan Kroenke’s palatial football arena welcomed his team and its co-tenants for a well-attended preseason opener. Although neither club played any of its stars, the crowd still clearly enjoyed its first collective trip to SoFi, which will host the Super Bowl in one day less than six months.

And although the game wasn’t a thriller, both teams gave those fans plenty to cheer. Rams quarterback Bryce Perkins made the individual play of the night in the fourth quarter when he scrambled from the pocket, stiff-armed Damon Lloyd and hurdled Kemon Hall to pick up a first down on third-and-9.

Perkins soaked up the love from the crowd, which included his parents.

“It’s electric,” Perkins said. “You can hear it. It’s just crazy, because last year we didn’t have fans … (so) you could feel a different kind of energy. It just makes play that much better. We feed off the energy of the fans cheering. And it’s a beautiful stadium, so it’s even more beautiful when it’s packed out.”

The Chargers shut out the Rams in the second half to win the head coaching debut of Brandon Staley, who took charge less than five years after he was the defensive coordinator at Division III John Carroll. The 38-year-old Staley spent last season with the Rams, where he led the league’s No. 1 defense in his only year as an NFL coordinator.

Staley was mostly pleased by his new defense’s resilience. The Rams drove to the Chargers 5 with 9 1/2 minutes to play, but Devlin Hodges threw an end zone interception to John Brannon.

“I really liked the fourth quarter,” Staley said. “It was important to us to be able to see everybody on the field. Defensively, I was very proud of the way we played down in there tight in the low red zone and getting the takeaway. That was a big highlight for us.”

Chase Daniel went 15 of 24 for 104 yards in the first half for the Chargers. Easton Stick quarterbacked the Bolts’ only touchdown drive, finding Jason Moore Jr. for an 18-yard gain before Bradwell’s scoring run.

Hodges started at quarterback for the Rams, who didn’t play new franchise QB Matthew Stafford or his backup, John Wolford. Hodges went 11 of 19 for 85 yards, but he didn’t make as many big plays as Perkins, who went 7 of 10 and also rushed for 23 yards.

Perkins, a second-year pro from Virginia who didn’t get a snap last season, led the Rams’ only touchdown drive in the first half, going 5 of 6 with a scoring throw to Trishton Jackson.

“Always want to try to come away with the win, but I thought there was a lot of encouraging things for us to be able to see,” Rams coach Sean McVay said. “Had a lot of guys that haven’t really played (getting reps) on whatever side of the ball.”

McVay used almost none of his expected regular-season contributors. Stafford, new receiver DeSean Jackson and All-Pros Aaron Donald and Jalen Ramsey were not in uniform.

“I know that we’re not the home team, but I feel like being here in the stadium and being around the guys for the first time in a game setting was amazing,” Slater said.

The Rams, who didn’t have a first-round pick for the fifth consecutive year, also played their draft choices. Their highest pick, second-round receiver Tutu Atwell, flashed his speed as a receiver and a kick returner, while linebacker Ernest Jones was the defensive signal-caller when on the field.

The Chargers’ opening drive was 21 plays long, making it the franchise’s longest in a preseason game during the 21st century. It ended in a short field goal by Tristan Vizcaino, however.

“There’s a lot that’s positive, but we have to score touchdowns in order to beat the best people we face,” Staley said.