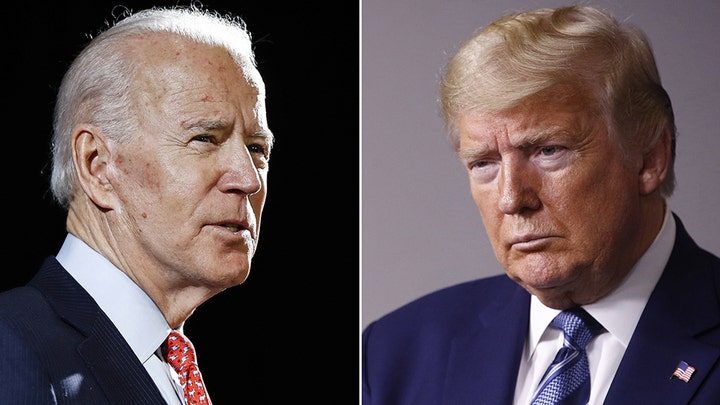 Amid the chaotic scramble at Kabul’s airport to evacuate the remaining Americans and U.S. allies out of Afghanistan following the swift collapse of the Afghan government and military at the hands of the repressive Taliban forces, a blame game of sorts has broken out among President Biden and his predecessor in the White House.

Biden rarely mentions former President Trump, but the current commander in chief twice spotlighted his predecessor – in a statement Saturday and in Monday’s speech on Afghanistan from the White House. And Trump has issued a flurry of statements the past couple of days, going as far as arguing that it’s time for the president “to resign in disgrace.”

Trump struck a deal with the Taliban in February of last year that called for all U.S. troops to depart Afghanistan by May 2021. Trump, during his watch, reduced U.S. forces to their lowest level in Afghanistan in two decades. And last year the Afghan government released thousands of Taliban prisoners, many of whom likely once again took up arms against the U.S.-backed forces.

But rather than reversing the Trump Afghanistan roadmap – as he did with plenty of other Trump policies – the president carried out the deal that was struck last year, overruling the opinions of his top military commanders.

On Monday, Biden spotlighted that “when I came into office, I inherited a deal that President Trump negotiated with the Taliban. Under his agreement, U.S. forces would be out of Afghanistan by May 1, 2021, just a little over three months after I took office. U.S. forces had already drawn down during the Trump administration from roughly 15,500 American forces to 2,500 troops in country. And the Taliban was at its strongest militarily since 2001.”

The president, in defending his moves in Afghanistan, emphasized that “the choice I had to make as your president was either to follow through on that agreement or be prepared to go back to fighting the Taliban in the middle of the spring fighting season.”

“There was only the cold reality of either following through on the agreement to withdraw our forces or escalating the conflict and sending thousands more American troops back into combat in Afghanistan, and lurching into the third decade of conflict,” he added.

While Biden has placed blame with Trump, the former president has repeatedly blasted his successor in the Oval Office.

“What took place yesterday in Afghanistan made our withdrawal from Vietnam look like child’s play. Perhaps in World history, there has never been a withdrawal operation that has been handled so disastrously. A President who has been illegitimately elected has brought great shame, in many ways, to our Country!” Trump charged in a statement on Tuesday morning.

A day earlier, Trump stressed that “it’s not that we left Afghanistan. It’s the grossly incompetent way we left!”

And he claimed that “the outcome in Afghanistan, including the withdrawal, would have been totally different if the Trump Administration had been in charge” and that the hectic evacuation “never would have happened if I were President!”

Trump on Sunday argued that the events in Kabul “will go down as one of the greatest defeats in American history!”

He also argued that “it is time for Joe Biden to resign in disgrace for what he has allowed to happen to Afghanistan….”

While the former president’s attacks on his successor are far from unexpected, it was less than two months ago that Trump was taking credit for the pullout of remaining U.S. troops from Afghanistan, ending the two-decade-long American mission in the central Asian war-torn nation that began in the weeks following the Sept. 11, 2001, terrorist attacks.

Veteran political scientist Wayne Lesperance, vice president of academic affairs at New England College, told Fox News that “Americans should not be fooled by critiques by former President Trump. The fact is the last four presidents all have a hand in the current crisis in Afghanistan. And while Biden will be remembered for the final withdrawal, it is certainly true that Presidents Trump and Obama set us on the path. There is plenty of blame to go around.”

The verbal fireworks between Biden are Trump may continue.

The former president will speak with Fox News’ “Hannity” Tuesday evening, and the current president is scheduled to be interviewed by ABC News’ George Stephanopolous on Wednesday.