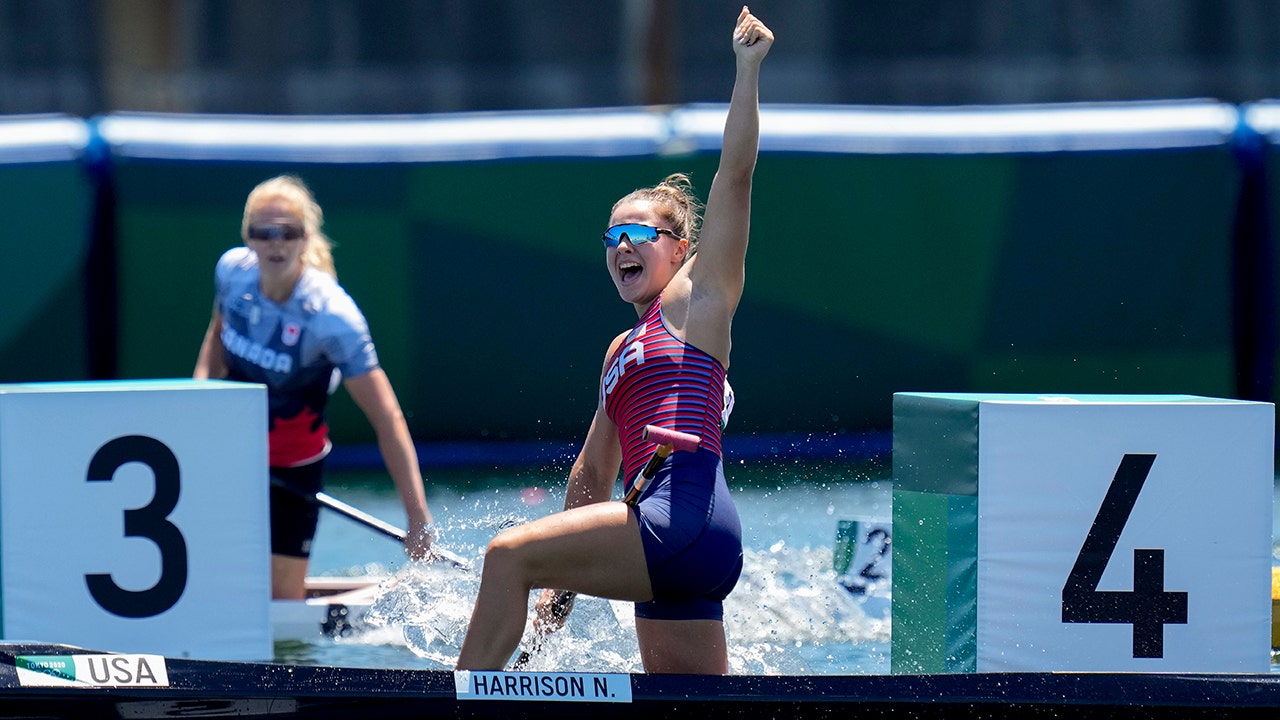 Nevin Harrison saved her tears for the finish line, where they came pouring out over a golden smile.

The American teenager made women’s Olympic history on Thursday when she surged over the back half of the first canoe 200 sprint final to overtake Laurence Vincent Lapointe of Canada for the gold medal. The Olympics added the event at the Tokyo Games as part of a push for gender equity.

“It’s exciting to be part of history, to see how awesome we all were,” Harrison said. “I knew it was going to be the hardest race of my life. It’s the Olympics, and that’s what it all about.”

The 19-year-old from Seattle who will soon start college at San Diego State is the first American woman to win a canoe sprint gold medal, and the first to win any kind of medal since 1964.

Harrison burst into tears after the finish and held her hand to her mouth before paddling to the dock. She fought back tears again during the medal ceremony, then cradled the gold next to her cheek.

She had been known to cry before races earlier in her career as part of a pressure release method. That didn’t happen this time, and she had all the energy and composure needed to rally from Vincent Lapointe’s early lead. Harrison not only won, she beat one of greatest canoe paddlers in history.

Vincent Lapointe had been the standard-bearer in the event with six world championships since 2010, and she had lobbied hard to get the race into the Olympics. The Tokyo Games was the first time the two best paddlers in the world had met on the water.

And quickly in front, they could see each other the entire race.

“I grew up watching her and hoping to one day be at that level,” Harrison said. “They say your idols eventually become your rivals.”

Harrison won the 2019 world championship at age 17 when Vincent Lapointe was serving a provisional doping suspension that was later overturned. After the layoff from international competition, Lapointe surprisingly didn’t qualify for the canoe 200 at the Olympic trials.

Canada put her on the team anyway and entered her in a kayak event she doesn’t race. She then switched to her specialty race.

The Canadian’s quick start suggested a strategy to break the young American early. Harrison stayed patient, and her sheer power and steady but furious stroke rallied her to the lead by the halfway point. Harrison was too strong to catch and won by half a canoe length.

“I’m so relieved. It hit me on the podium that I’ve done it,” Lapointe said. “I might not have won a gold, but this silver tastes amazing.”

Vincent Lapointe could still win a gold medal. She is scheduled to race the canoe double 500, where she and teammate Katie Vincent are favorites to win.

Lisa Carrington of New Zealand took her third gold medal in three days, winning the women’s kayak 500 with another dominant start-to-finish victory. Carrington won the 200 and double 500 earlier this week and is still scheduled to race the 500 fours.

“When you set out to do something, it is such a huge task. It is super scary to think it is possible,” Carrington said. “It is just amazing to be able to pull it off.”

Sandor Totka of Hungary won the gold medal in the final men’s Olympic kayak 200, becoming the first non-British paddler to win the event since it started in 2012. Manfredi Rizza of Italy took silver, and defending Olympic champion Liam Heath of Britain won bronze. Only 0.045 seconds separated gold from silver.

“It will be missed, but it has been incredible to be part of its journey,” Heath said.

Thomas Green and Jean van der Westhuyzen of Australia won the men’s kayak double 1,000 meters at the Sea Forest Waterway with a finishing kick over the final 200.

Mox Hoff and Jacob Schopf of Germany were 0.304 seconds behind to take silver. Rodek Slouf and Josef Dostal of the Czech Republic won bronze.